This has been a long journey for us, starting from an idea in Manitoba that turned into a reality in Southern Ontario. We still have a long way to go, but here are some highlights so far.

In 1992 arable farmers were invited to attend a conference in Brandon, Manitoba held by Manitoba Agriculture to discuss crop diversification. At the conference, Aubrey Morris the co-founder of Flowers to Fragrance, came across an old paper relating to a similar conference held in 1988. The topic that sparked Aubrey Morris’s interest was a talk given by G. Mazza on the growing of Monarda sp. for essential oil extraction. A seed was planted and subsequently Aubrey ventured on a journey of research and study to learn more about essential oils and their benefits and properties.

During the early 1990’s low commodity prices forced farmers to look at alternatives. We started to think about herbs and essential oils.

In our search for that special crop we found Monarda. Little did we know it would lead us to Lavender and Flowers to Fragrance.

His search resulted in the accumulation of a reference library on herbs and aromatherapy and a certificate from Purdue University in 1997. To better understand the requirements of growing herbs and flowers for essential oils, Aubrey and wife Shirley traveled to the United Kingdom, Australia, New Zealand, and Tasmania, specifically visiting a number of lavender farms.

Growing the Monarda in Manitoba. Flax in the background.

Monarda Essential Oil. Geraniol has a rose-like odor and is commonly used in perfumes.

During this time we also grow Coriander.

As the climate in Manitoba was too harsh for lavender, Aubrey focused his research on growing Monarda, a native plant of North America and member of the mint (Mentha) family. Morden Research Laboratory Station in Manitoba had conducted a research program on geraniol essential oil used in the perfume industry. They had specifically looked at the essential oil being produced from a hybrid Monarda plant known as Monarda No.3 or Morden Monarda. This hybrid was found to produce one of the world’s purest forms of geraniol oil and yielded high volumes of oil through steam distillation. The plant was very cold hardy and potentially offered Manitoba farmers a unique crop alternative. Unfortunately, synthetic versions of the oil were being manufactured that were readily available, effectively lowering the market value of geraniol essential oil. As a result, Morden halted their research on the Monarda hybrid in the 1990’s. Aubrey Morris managed to acquire a number of Monarda plants from the research station, just before they were ploughed into the ground. He planted the salvaged Monarda at his Boissevain, Manitoba farm. As the hybrid plants do not seed – they have to be hand-propagated which is what Aubrey did in 1998 to establish a half acre plot of the beautiful blooms.

A new farm in southern Ontario with new possibilities and a much better climate.

We planted Monarda brought from Manitoba and a few Lavender plants.

In 2004, after 10 years of crop farming in Manitoba, the Morris family decided to move to Ontario. They purchased a 50 acre farm property near Mount Forest. Aubrey Morris didn’t like the thought of leaving his Monarda plants in Manitoba so, hiring a U-haul truck and using the family Jeep, Aubrey and Shirley drove back to Boissevain Manitoba to dig up the plants, loading and driving them back to plant in their new location.

Aubrey’s interest in essential oils only increased with the family’s move to Ontario. After their first winter in Ontario, Shirley discovered that a few lavender plants had survived the winter in their garden. This gave them the confidence to plant their first crop of lavender plants in 2005. Aubrey and Shirley Morris had formed good working relationships with Richter’s Nurseries based in Newmarket, Ontario over the past years and purchased 800 lavender plugs from the nursery; varieties included Grosso, Twickle Purple, English and Provence. Unfortunately most of these plants died due to the location of the field being too exposed to prevailing winds and insufficient drainage, later discovered as problems from the sceptic run-off. 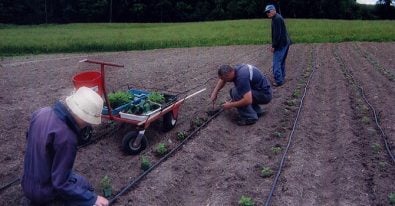 We finally get a steam distiller but it arrives too late in the year to be used.

Not to be put off, in May 2006, a further purchase of 1000 lavender plants were again planted by hand, this time on a much more favorable site that was well protected and better drained. During this year, hyssop (Hyssopus officinalis) and lemon balm (Melissa officinalis) were also planted and the Morden Monarda further propagated and established in the farm’s fields.

The 2006 planting of lavender was fairly successful, showing good survivability of the varieties planted. Since that time, various varieties were trialled with mixed results.

Lemon Balm just about to cut… by hand.

In 2007, 12,800 Grosso and Provence were planted along with trial lavender varieties Maillette, Buena Vista and Sachet. All prove to grow very well so continue to increase plant stock of these varieties. The plants were harvested and steam distilled to extract their essential oils (in 2006 hyssop and monarda; 2008 lavender). 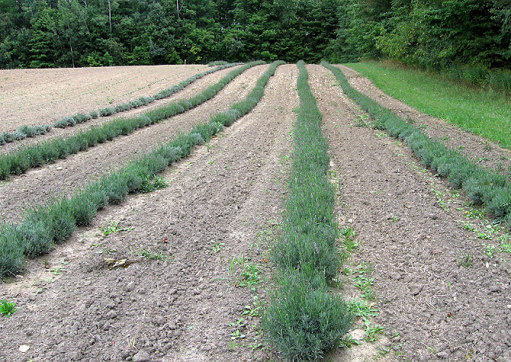 The Lavender planted in 2006 grows well in this new location on the farm.

…so we planted the rest of the field in a very dry June. To keep the plants alive we watered by hand.

11,800 plants of Grosso and Provence Lavender.

Experimenting with straw cover – it didn’t work for us, holding too much water around the plants in early spring which caused alot of damage to the center of the plants.

Diversifying the farm’s essential oil crops was not only to expand the bank of essential oils used in natural hand-made skin care products, but in the response to the varying micro-climatic conditions of the farm. Poorly drained and highly exposed fields have compelled the farm to experiment with alternative herbs and flowers beyond the Lavender. Rather than attempt to significantly modify the soils or wait for the establishment of hedgerows, the Morris’ have worked to match the right plant to the right growing conditions, minimizing dieback as well as costs and intensive labour.

Maillette, Buena Vista, Sachet and Royal Velvet Lavender are planted in a new field this year. We also planted more Hyssop and Monarda.

In 2008 we got our Australian harvester… no more cutting by hand.

Having successfully established a variety of lavender and herb crops, the family decided to move into the commercial side of the business, selling natural skin care products made with the farm’s oils and hydrosols, through the farm’s store. Working with an Ontario-based aroma therapist and a soap maker, a line of products was generated which included natural lotions, creams, and soaps, as well as a range of products for your home, including dried lavender arrangements.

Provence Lavender had a hard time getting through the 2008/09 winter.

The construction of the retail store was commenced in 2010.

Maillette, Buena Vista, Sachet Lavender make it through another winter.

Monarda Hyssop and Lavender, flowering at the same time in July.

After nearly five years of growing lavender in Ontario, Flowers to Fragrance Lavender Farm was officially opened to the public on June 26, 2011.

In our search for that special crop we found Monarda. Little did we know it would lead us to Lavender and Flowers to Fragrance.